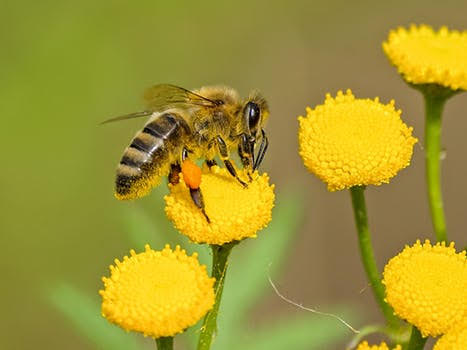 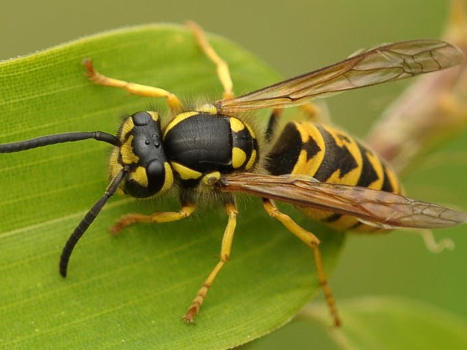 Wasps live in colonies, like bees, but they have very different physiological differences and their behavior is very different from bees. These creatures can be aggressive and mean.

Wasps tend to be a little larger and more slender than bees.

They also have less body hair than a bee. Wasp body hair is finer and harder to see.
Wasps have jaws that aid them in building their nests in addition to outside substances that create the material that makes up the nest.
They prefer eaves, roofs, trees, decks and ares they can use to build a nest. Areas where corners or 2 pieces of wood join so the nest can attach to the structure.

B.) Yellowjackets & hornets – build large, round, enclosed nests with a small opening near the bottom.
The above are considered social wasps. They mate late in season. The female hibernates for the winter and the poor male dies. Warmer weather arrives along with fertilized eggs. She finds a place to build part of the nest and lay those eggs.
Wasps can sting over and over and over. They typically sting to defend themselves and their nests. Wasps do not lose their stingers like bees ?.
Some species of wasps sting and paralyze other insects like spiders, flies and more to bring back to the nest for their young.
They have wings that allow them to fly. Wasps move their wings quickly to life them in the air. Wasps are also strong flyers with the ability to fly for long distances. So if the nest of wasps are disturbed or become angry it can be extremely dangerous. Don’t try removing a nest on your own! Call a licensed pest control technician to handle the job.

« Where are all the ants coming from?
Boxelder Bugs »

Have Questions About Extermination?